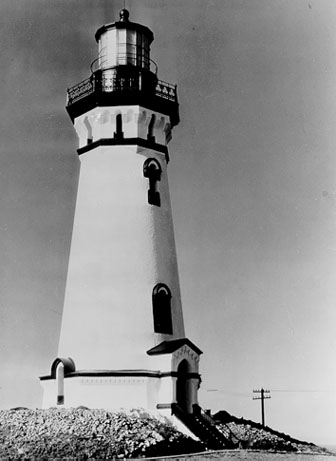 A new lighthouse began operations in the part of central California that is about halfway between the San Francisco Bay Area and Los Angeles. Piedras Blancas Light Station, specifically located a little over five miles (8.1 kilometers) west by northwest of the town of San Simeon, has since served as a key navigational aid for vessels sailing through the region. (“Piedras Blancas,” which is Spanish for “white rocks,” is a reference to the type of stones found in abundance along that section of California’s Pacific coast.)

The first keeper at Piedras Blancas Light Station was Stephen Morse, who served in the position for four years. He was succeeded by Lorin V. Thorndyke, who remained keeper there for 27 years. Over time, the lighthouse firmly established itself as a cherished and reliable fixture for mariners seeking to make their way safely in the area.

“Piedras Blancas Lighthouse, the ‘beacon of the ‘white rocks,’ flashes its warning to modern steamers just as it did to the full-rigged sailing vessels of half a century ago,” proclaimed southern California’s Oxnard Daily Courier in a 1928 article about the structure. The article underscored how the lighthouse was providing “true and constant guidance” and “saved ships and men from destruction on the rocky shore.”

The Oxnard Daily Courier also emphasized how Piedras Blancas Light Station had become a popular tourist attraction by that time. The newspaper reported, “Motoring visitors who daily turn their cars from the good gravel coast road onto the wooden trestle that permits passage across a sandbar to the old light are given a cordial welcome by Captain A. Czarnecke, a smiling veteran of 65 years who has been keeper of this light for 12 years and in the government lighthouse and naval service for 33.”

Piedras Blancas Light Station has been automated since 1975. Along with serving its original navigational purpose, the facility is also managed as a historic park and part of a wildlife sanctuary. In addition, the lighthouse made it onto the big screen – at least in name – in the 1959 film “The Monster of Piedras Blancas.” The lighthouse locations for this horror movie were actually shot at the Point Conception Light, which can also be found on California’s central coast.