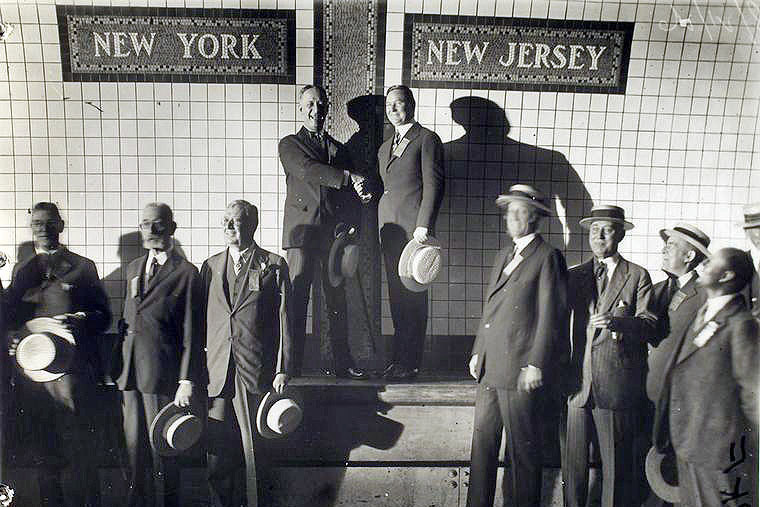 The Holland Tunnel was opened to traffic in the New York metropolitan area just one minute after midnight. This highway conduit, which runs beneath the Hudson River and connects New York City’s island of Manhattan with Jersey City, New Jersey, was the first twin-tube underwater vehicular tunnel in the United States.

The tunnel was also among the first to be built with mechanically ventilated features. That active ventilation network of fans within the tunnel is essential in counteracting the carbon-monoxide component of automobile exhaust in that enclosed structure and thereby keeping travelers safe.

Construction on the tunnel began in 1920. The project’s first chief engineer was Clifford Milburn Holland, who had come up with the design for the tunnel. Holland died of a heart attack in October 1924, and Milton H. Freeman was selected to replace him. Freeman died of pneumonia that following spring, however, and was succeeded by Ole Singstand.  It was Singstand who oversaw the completion of the tunnel.

A total of 52,285 automobiles traveled through the 1.6-mile (2.6-kilometer)-long Holland Tunnel on its first day of operation. The next day’s edition of the New York Times reported, “From 12:01 Sunday morning until midnight last night there was never a break in the line of entering automobiles, and at midafternoon most of the cars on the streets of the metropolitan section seemed to be converging upon the mouths of the tunnel.” The New York Times also noted, “Tunnel officials who watched with amazement the veritable wave of cars that came in the afternoon said that apparently no other public work since the Brooklyn Bridge had so touched the imagination of the people.”

The first automobile to make its way through the New York side of the tunnel on its inaugural day of service was that of General George R. Dyer, chairman of the New York State Bridge and Tunnel Commission. E.W. Bloomingdale, the commission’s vice chairman, also rode in that automobile. Their automobile was followed by one transporting the widows of Holland and Freeman.

The first automobile to enter the Holland Tunnel from the New Jersey side early that Sunday morning was a roadster driven by Charlotte Boettger. Her passengers were her sister Margot and – sitting on the vehicle’s rumble seat – their chauffeur Alex Sinclair. Charlotte and Margot’s father, Theodore Boettger, was chairman of the New Jersey Interstate Bridge and Tunnel Commission. While not joining his daughters and the chauffeur for their ride through the tunnel, he did wave to them as they sped into the new structure.

The dedication ceremonies for the Holland Tunnel had taken place the day before. President Calvin Coolidge, who was more than 200 miles (321.9 kilometers) away on board the yacht Mayflower while she was at anchor in the Potomac River, formally unsealed the tunnel on each side by pressing a golden telegraph key that had been used by President Woodrow Wilson more than two decades earlier to detonate the charge that opened up the Panama Canal for service. After Coolidge hit that telegraph key, it transmitted long-distance electrical currents that drew aside large American flags that had been covering both the New York and New Jersey entrances to the Holland Tunnel.

The dedication ceremonies for the Holland Tunnel also involved having various public officials from both New York and New Jersey promote the new structure and its potential benefits for the region. New Jersey A. Harry Moore proclaimed, “Let me sum up my thoughts briefly by saying that these two tubes forming the great Holland Tunnel spell opportunity in the fullest sense of the word.”

In his own remarks for occasion, Theodore Boettger focused on the engineers who had made the tunnel a reality in the first place. He said, “I must give great and generous praise for the completion of this greatest of engineering feats of its kind to the engineers who planned and did the actual construction work.”

Boettger then highlighted the person after whom the new structure was named. Boettger asserted, “Outstanding among them was Clifford M. Holland. It was his vision, backed by the wonderful assistants who surrounded him, with the help of many of the best minds available in the country, and backed by efficiency and loyalty on all sides, that made the tunnel one of the wonder works of the world.”