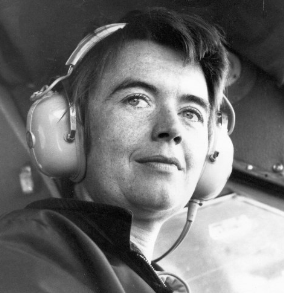 Canadian aviation pioneer Lorna de Blicquy was born in 1931 near the town of Goderich in the province of Ontario. De Blicquy, who developed a strong interest in aviation after a cousin took her for a flight over the Canadian capital of Ottawa, started to take flying lessons when she was only 14.

At the age of 15, de Blicquy made her first solo flight when she took to the skies in a Piper J-3 Cub light aircraft. She received her private pilot license in 1948 and earned a commercial license five years later.

De Blicquy became one of the first Canadian women to pursue aviation as a full-time profession, and her career was ambitious and trailblazing in several key respects. She was the first woman commercial pilot to make flights into Canada’s Arctic region, for example. De Blicquy’s aviation career also took her to areas far beyond Canada; these assignments ranged from sightseeing tours in New Zealand to famine relief missions in Ethiopia.

De Blicquy also worked hard as a flight instructor. A 1965 article in the Ottawa Journal newspaper noted, “Whether she’s in New Zealand, the Far North or Ottawa, as long as she can spend hours flying or teaching others the thrill of flying, she’s happy.”

In addition, de Blicquy was a tireless advocate for women when it came to employment opportunities involving aircraft. She overcame one significant gender barrier in this regard in 1977 when she was hired to serve as Canada’s first female civil aviation inspector. De Blicquy made history yet again when she became the first Canadian inducted into the International Women in Aviation Pioneer Hall of Fame. She died in 2009 at the age of 77 in the Ontario community of Beaverton.