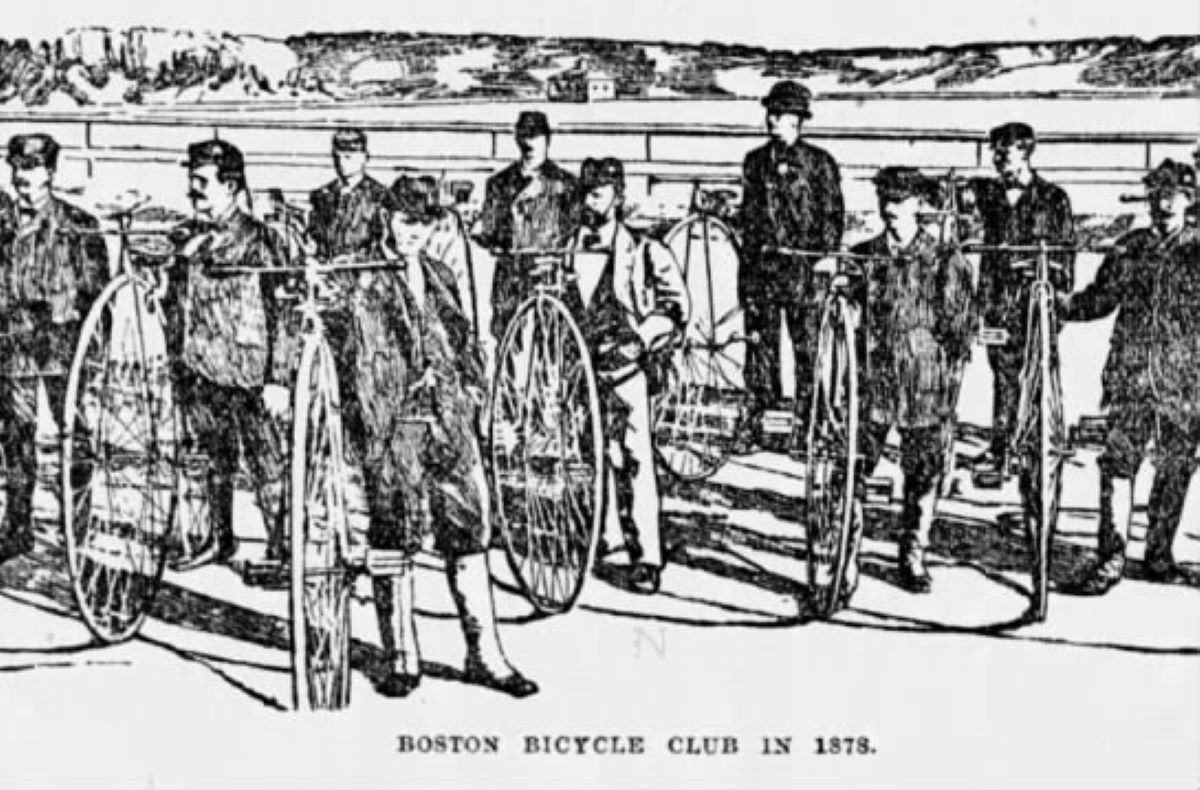 The Boston Bicycle Club was formally established. This club was the first official bicycle organization in the United States, and it took shape a year after the nation’s first periodical focused on that transportation mode – The American Bicycling Journal – had been likewise launched in the capital of Massachusetts.

The Boston Bicycle Club was co-founded by Charles E. Pratt and Frank W. Weston, and initially consisted of 14 members. Though few in number, the club’s members wasted little if any time in making a memorable impression when it came to newspaper coverage.

A little over a month after the Boston Bicycle Club was established, Weston led several of its members on a bicycle ride from Trinity Church in Boston’s Back Bay neighborhood to the suburb of Milton. The New York-based Buffalo Commercial subsequently reported that “on their return trip, some of the members with their bicycles had lively brushes with some of the fast horses on the road.”

The following month, one of the members of the Boston Bicycle Club took part in an activity involving another type of foot traffic. This competition began in the Massachusetts city of Haverhill, which is located on the state’s border with New Hampshire, and it pitted a pedestrian named C.A. Harriman against Boston Bicycle Club member Charles A. Booth.

The specific objective for this contest between both men was to see whether Harriman could walk a distance of seven miles (11.3 kilometers) before Booth finished covering 20 miles (32.2 kilometers) on his bicycle. The Boston Post reported, “The match resulted in a victory for the former, whose time was seven miles [11.3 kilometers] in one hour, fourteen minutes, and fifteen second, to the latter’s eighteen and a half miles [29.8 kilometers].”

Despite close encounters with “lively horses” and at least one competition in which a pedestrian prevailed, the Boston Bicycle Club managed to achieve widespread respectability and renown in a relatively short time. By 1882, the club’s membership had grown to 125 people altogether. The club also helped cement Boston’s role at the time as the preeminent place in the nation for the increasingly popular use of bicycles. The club also inspired the creation of similar organizations elsewhere. A bicycle club was formed in Buffalo in 1879, for example, and another club was launched in New York City the year after that.

For more information on the history of bicycles in Boston, please check out Bike History | City of Boston