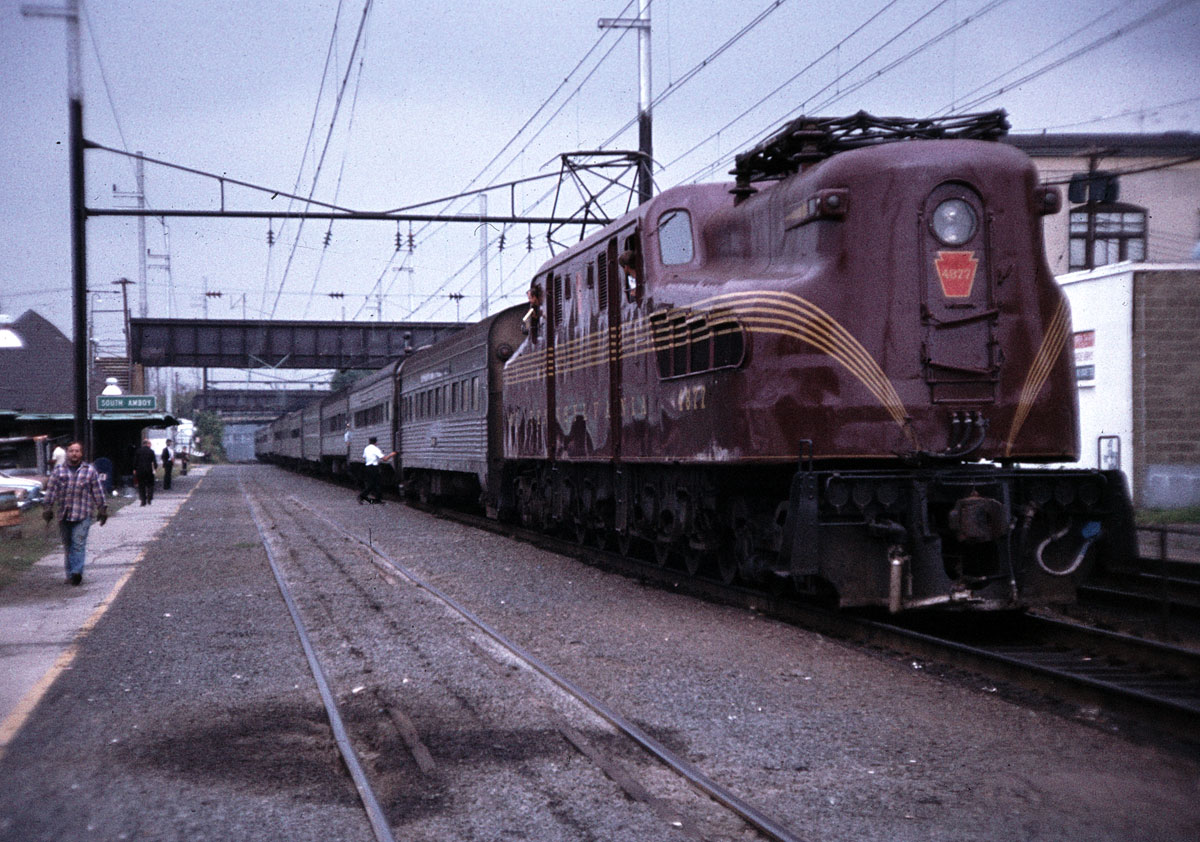 Nearly a half-century after its debut, the streamlined electric locomotive known as the GG1was retired from active service once and for all. The GG1 era formally ended when New Jersey Transit (NJ Transit) – the last operator of that class of locomotives – ran a series of farewell trips between the borough of Matawan and city of Newark. The GG1s used for those trips were locomotives 4877, 4879, and 4882.

The bidirectional GG1s, which were distinguished by such features as their sculptured car bodies and contoured hoods, had been created between 1934 and 1943 in response to the need for locomotives able to pull more than 12 to 14 passenger cars at a time at speeds of up to 100 miles (160.9 kilometers) per hour. The GG1s were originally used by the Pennsylvania Railroad (PRR), and they were built at both Altoona Works (a large PRR industrial complex in the central region of the Keystone State) and one of General Electric’s locomotive plants.

Thousands of people, ranging from one-time commuters to railroad buffs, showed up to watch the GG1s operated by NJT make their final runs on that Saturday in 1983. John P. Sheridan, Jr., who was commissioner of the New Jersey Department of Transportation from 1982 to 1985, used the occasion to both underscore the significance of those locomotives and emphasize why they were being removed from service. Sheridan said, “The GG1s have a rich heritage of railroading in New Jersey and the northeastern United States, and while all of us are somewhat saddened by their retirement, we can no longer use these famed locomotives because they are costly to operate and maintain.”

L. Richard “Rick” Mariani, spokesman for NJT, highlighted the large turnout for the valedictory trips of his agency’s GG1s and specifically all of the people who lined along or near railroad tracks to wave goodbye to those locomotives. “People were saddened and paid tribute to worthy equipment,” said Mariani. “It was the glory of the GG1, the final culmination of an equipment career that will have no equal.”

No. 4877, one of the last locomotives to run on that last day of service for the GG1s, had been built in 1939 and was nicknamed “Big Red.” This locomotive, which is pictured above, became the focus of a documentary made about those final operations of the GG1s. (This film was released a year after those farewell rides took place.) The locomotives used on that day are three of only 16 GG1s that are still around and intact today.

For more information on the GG-class of streamlined electric locomotives, please check out https://en.wikipedia.org/wiki/Pennsylvania_Railroad_class_GG1

Additional information on GG1 No. 4877 (“Big Red”) is available at https://en.wikipedia.org/wiki/Pennsylvania_Railroad_4877