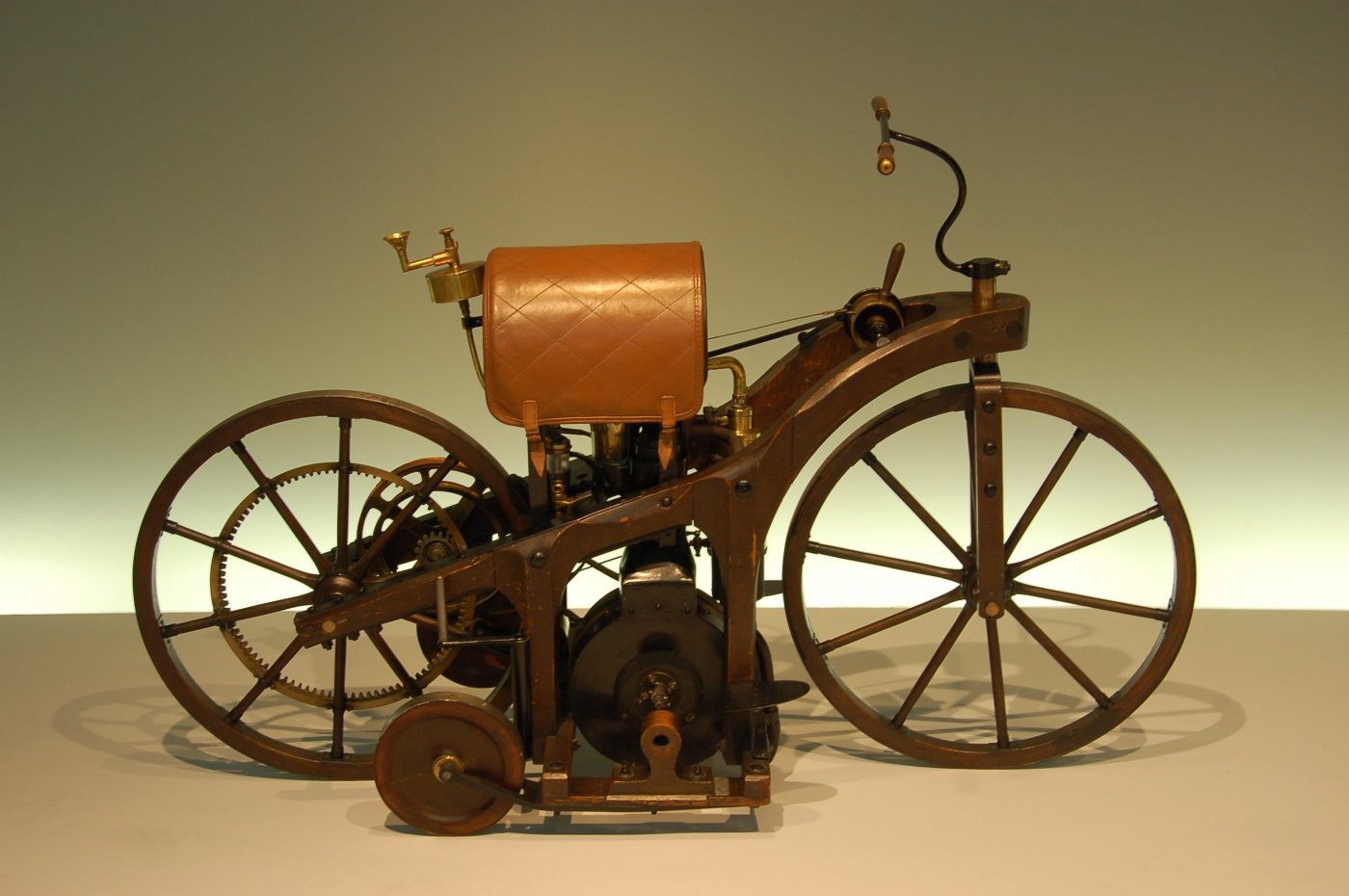 In the Kingdom of Württemberg (at the time a state of the German Empire and now part of the Federal Republic of Germany), 17-year-old Paul Daimler undertook the first trial run of what is widely regarded as the world’s first motorcycle. His father Gottlieb Daimler, along with Wilhelm Maybach, built the vehicle in a garden shed behind the Daimler house in the Cannstatt borough of the city of Stuttgart in the Württemberg. By the time they were working on that mode of transportation, the penny-farthing bicycle — characterized by an oversized front wheel and a tiny rear wheel — was well on its way to ultimately being supplanted altogether by the newer “safety” bicycle.

The elder Daimler and his business partner Maybach modeled their motorized version of a bicycle on the latter of those models, complete with equal-sized wooden wheels with iron treads. Both men had acquired mechanical experience by producing engines for such devices as fire pumps and printing presses, and both men used that knowledge to construct an air-cooled, single-cylinder engine for their new vehicle. This motorcycle, dubbed the Daimler Reitwagen, also had a saddle outfitted as the seat and a brake that was operated by pulling a cord. (“Reitwagen” is the German phrase for “riding car.”)

When taking the vehicle out for its first test ride, Paul Daimler made a round trip of approximately eight miles (12.9 kilometers) between Cannstatt and the Stuttgart borough of Untertürkheim. His experimental trek proved successful, even if the roads were less than smooth and the heat of the engine set fire to the saddle at one point.

In the winter following that maiden run, further improvements and adjustments were made to the Daimler Reitwagen. Gottlieb Daimler subsequently set aside work on the motorcycle, however, to focus more on developing the four-wheeled vehicles for which he is better known today. Nonetheless, the Daimler Reitwagen remains significant because the process for developing it helped pave the way for many of the technological patterns and principles for motor vehicles that were subsequently built.

(The above 2006 photo features a replica of the Daimler Reitwagen that is on display at the Mercedes-Benz Museum in Stuttgart.)

For more information on the Daimler Reitwagen, please check out https://en.wikipedia.org/wiki/Daimler_Reitwagen

One thought on “1885: A Teenager Undertakes the First Trial Run of a Pioneering Mode of Transportation”