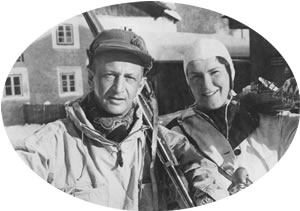 Swedish sailing pioneer Dagmar Mörner Salén died in Stockholm at the age of 79. She was born into Swedish nobility in 1901 in the city of Örebro. In 1931, she married Sven Salén (1890-1969). Along with being a highly regarded songwriter, he was a businessman who founded and operated the shipbuilding firm Salén Lines (part of the Salén companies still in existence).

Sven Salén was also an accomplished sailor in his own right, achieving international fame in 1927 when he finished first in the Scandinavian Gold Cup races off the coast of Oyster Bay, New York. The vessel that he used in this competition was May Be, which had been created by renowned yacht designer Gustaf Estlander.

The yacht May Be was in an even brighter global spotlight in 1936 when she served as the vessel for Sweden in the Six Metre sailing event at that year’s Summer Olympics in Germany.   The Six Metre races had been an Olympic sailing event since the London games in 1908. “Six metre” refers to an international class designation rather than actual required measurements, with the average vessel in these competitions averaging about 10 meters (34 feet) in length.

The venue for the series of Six Metre races in the 1936 Olympics was the Firth (or Bay) of Kiel in northern Germany. Sven Salén was the helmsman for May Be, and the other members of the Swedish crew included sailors Lennart Ekdahl (1912-2005), Martin Hindorff (1897-1969), and Torsten Lord (1904-1970). The fourth member of the crew – and its only female – was none other than Dagmar Salén.

The scoring system for this Six Metre races had first been used for the competition held during the 1932 Summer Olympics in Los Angeles. This scoring system included awarding one point to every yacht that completed each race and one point for each vessel that a yacht outraced en route to the finish line. A dozen vessels took part in the seven races held in 1936. The crew of May Be ultimately placed third in the competition with a total of 62 points, outpacing the fourth-place Argentine yacht Wiking by 10 points. May Be trailed behind the second-place Norwegian vessel Lully by only four points, with the British yacht Lalage narrowly winning the overall event with 67 points.

The third-place finish of May Be resulted in bronze medals for Sven Salén and his crew. This made Dagmar Salén the first-ever Swedish woman to win an Olympic medal in sailing.

For more information about the Six Metre sailing event at the 1936 Summer Olympics, please check out https://en.wikipedia.org/wiki/Sailing_at_the_1936_Summer_Olympics_%E2%80%93_6_Metre.