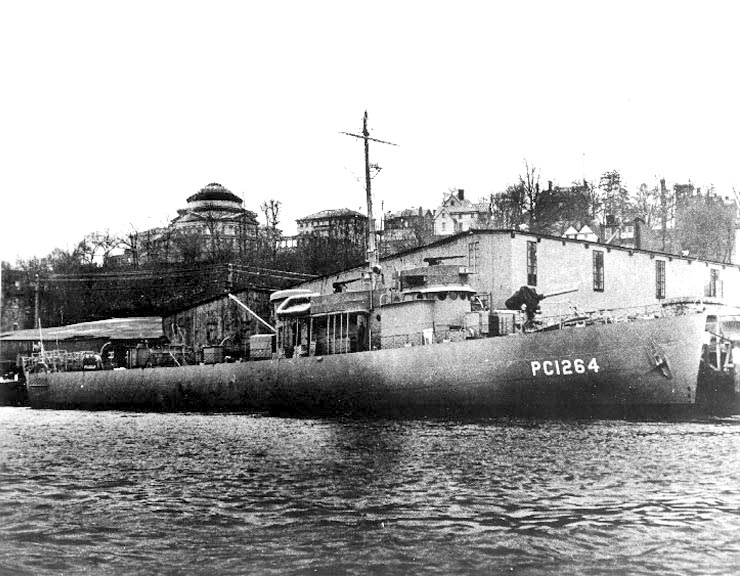 A World War II ship that played an important role in African-American history was decommissioned by the U.S. Navy. The submarine chaser USS PC-1264, which had been launched during the fall of 1943, was one of only two Navy ships during the war to have a predominantly African-American crew. (The other vessel with this distinction was the destroyer escort USS Mason, which was likewise launched in 1943 and remained in service until 1945.)

Submarine chasers such as PC-1264 filled a vital need when it came to protecting the Atlantic coast of the United States against German U-boats. This was because these submarine chasers were faster and less costly than destroyers as well as destroyer escorts and required smaller crews.

During the course of her military service, PC-1264 served as an escort for other vessels and engaged in anti-submarine warfare both along the Atlantic coast and in the Caribbean Sea. One especially noteworthy assignment involved having PC-1264 help patrol the areas between Long Island south and Virginia-based Cape Charles in response to reports that the Germans were planning to launch V-1 and V-2 rockets via U-boats against major U.S. ports.

Despite the ways in which they effectively served on board PC-1264, these African-Americans were still subjected to racial discrimination in various parts of their own country. The government of Miami Beach, for example, refused to allow the crew of PC-1264 to take part in training exercises on that Florida city’s shoreline. Ultimately, however, the performance of this submarine chaser earned widespread respect for her crew and helped persuade the Navy to expand opportunities for African-Americans within that military service.

At the time of the decommissioning of PC-1264, the members of the ship’s crew gathered at the Witoka Club in New York City to collectively pay their last respects to the ship. “Sorrowful Crew Members Bid Farewell to PC-1264,” announced a headline in the Baltimore Afro-American newspaper. Among those in attendance at this gathering was Ensign Samuel L. Gravely Jr., who had become the only African-American officer on board PC-1264. “It was a good little boat and we all liked our job,” he said in an interview with the Baltimore Afro-American.

Gravely’s pioneering accomplishments did not end with his service on board that ship. He went on to become the first fleet commander and the first flag officer in the Navy. Gravely retired from the Navy as a vice admiral in 1980.