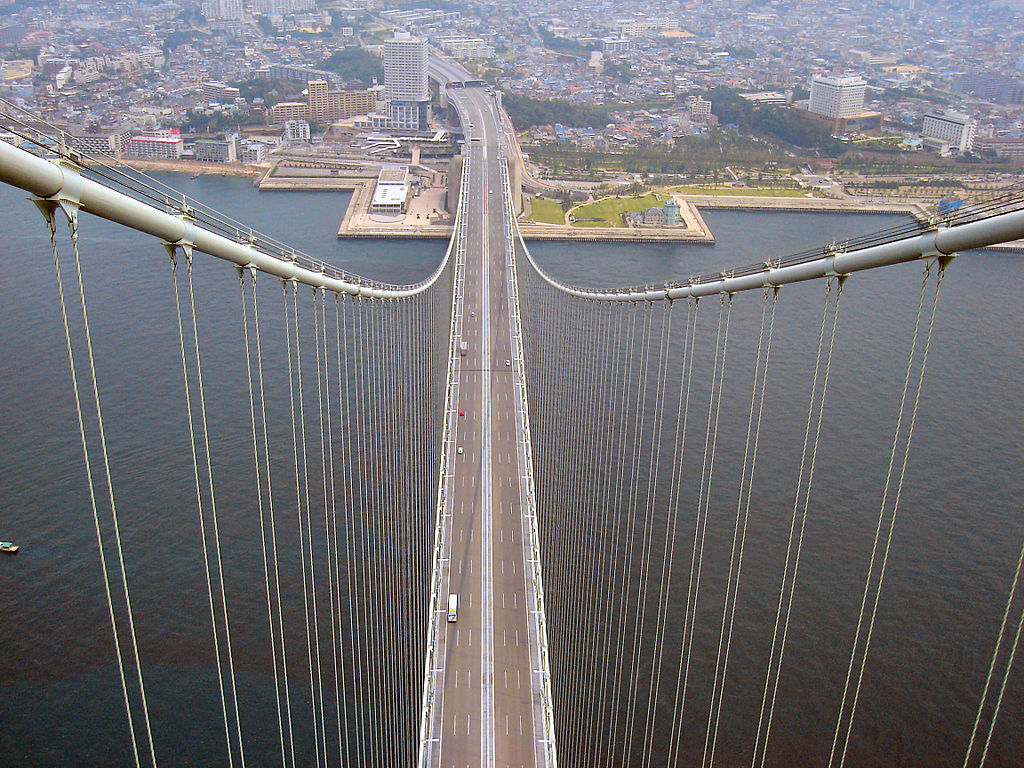 A major link in the latter of those initial sections of the expressway is the Ōnaruto Bridge, which spans the Naruto Strait between Awaji and Ōge Islands. This suspension bridge has a main span of 2,874 feet (876 meters).

The next stretch of the Kobe-Awaji-Naruto Expressway to be completed was the portion between Sumoto and present-day Minamiawaji. This section was opened to traffic in 1987. In 1998, the fourth section of the expressway was opened in the city of Kobe in the part of Hyōgo Prefecture on Honshū (the largest and most populous of Japan’s main islands).

At that time, the Akashi Kaikyō Bridge (included in the above photo) was inaugurated to carry the expressway across the Akashi Strait between Kobe and Awaji. Those taking part in the dedication of this suspension bridge included Naruhito Japan’s crown prince (now emperor); his wife Masako, crown princess (now empress); and Tsutomu Kawara, construction minister. This structure’s central span, measuring 6,532 feet (1,991 meters) in length, is the longest one for any suspension bridge in the world.

The Kobe-Awaji-Naruto Expressway, which is now signed as E28 within Japan’s network of controlled-access toll expressways, covers 55.3 miles (89 kilometers) altogether. A total of 15.1 miles (24.3 kilometers) of the expressway encompass bridges, including the major ones that cross the Akashi and Naruto Straits.

For more information on the Kobe-Awaji-Naruto Expressway (E280), please check out  https://en.wikipedia.org/wiki/Expressways_of_Japan

Additional information on Japan’s expressway system is available at https://en.wikipedia.org/wiki/Expressways_of_Japan